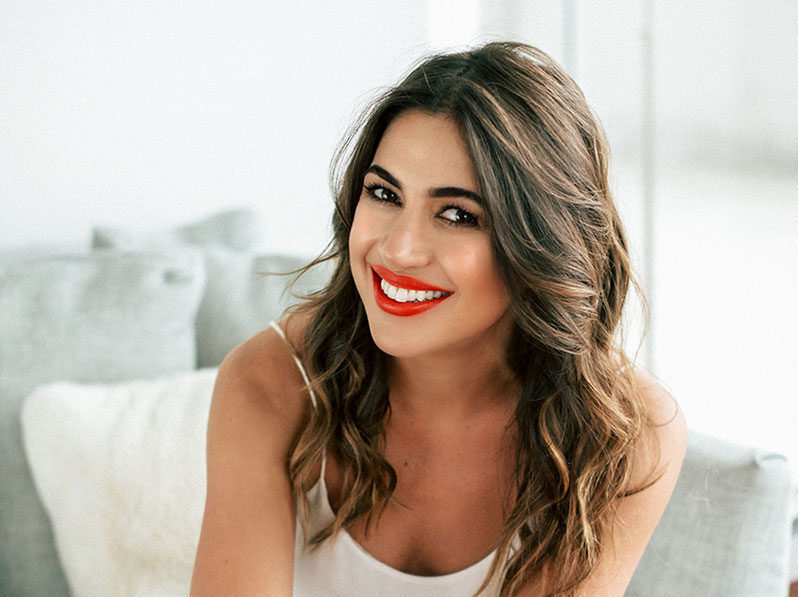 Asking for what you want may seem simple and straightforward, and in some situations it is. In others, though — especially for those of us who have been conditioned to feel guilty when asking for so much as the WiFi password at a café — there’s much inner turmoil involved. It takes deliberate self-assurance to remind ourselves that we should ask for what we need and deserve, and that sometimes putting ourselves before others is best for everyone. If you’ve ever felt your confidence challenged by asking for what you want, read on as five female founders share concrete examples of how they put themselves first.

Rocio Vazquez Landeta: Defending What Her Services Are Worth

Let’s be honest: people love (and expect) freebies and discounts, and as the founder of Eat Like a Local — a Mexico-based tour company specializing in food tours — Rocio Vazquez Landeta finds herself on the receiving end of such requests.

“As women entrepreneurs, people tend to believe we can give our time and effort for free. I get a lot of questioning about my services’ worth, and there are a lot of requests for free services in exchange for exposure,” she says. “The last request I received was for an insane discount, so I sent the traveler an email explaining why that’s not good. I asked him to respect me, my company, and my time and effort creating my tours. People need to understand that you are not only charging for a service — you are charging for your time, talent, experience and creativity. Always charge what is right, always respect your company and your products, and always let people know why you and your company are valuable.”

Dr. Lara Fielding: Leaving a Relationship to Pursue
Her Goal of Motherhood

Dr. Lara Fielding is a licensed psychologist, author of Mastering Adulthood and founder of Mindful Mastery. She says that skillful assertiveness is one of the most important skills she teaches for building a happy and fulfilling life. The ultimate goal is to stand up for yourself while also maintaining the health of your relationships, but sometimes, she says, you have to choose one or the other.

“At 38, having just completed my master’s degree at Harvard, I met a man who I thought was ‘the one’ — the guy that made all the mistakes and heartache before worth it. One night out to dinner he told me he had a vasectomy. I was dumbfounded that he had not told me sooner, but he said he was open to reversing it,” she recalls. “This became the topic of discussion for the next 10 months as we also fell more and more in love. Having no family of my own, I grew deeply attached. Making the decision to let go of having children or let go of Mr. Wonderful was excruciating.”

At the 10-month mark of their relationship, just as Dr. Fielding was about to close on the sale of the house where she intended to build a life with him, he informed her that he would not be open to having a child. She was crushed — and torn, as she needed to decide between the man she loved, or leaving him to pursue motherhood. It took her some time to figure it out, but she ultimately chose her own needs over the relationship.

“Given my age, I knew that I may or may not be able to have a child on my own, but I could not stand for someone else making the decision for me. I left Mr. Wonderful and leased a charming cottage for myself and my beagle Emily,” she says. “Ultimately, I accepted my situation [of not being able to have children]. I can still feel the pull on my heart strings sometimes when I watch movies about families, or women having babies. But by choosing my needs, I reclaimed my power: the power to direct and design the best life I can, with the pieces I was given.”

Jessica Speckhard is the founder of SecondDaughter, a small independent jewelry business. As is often the case, she hires contractors to help keep her business prosperous, but she recently found herself in a situation where an online marketing contractor wasn’t meeting her standards.

“This company wasn’t delivering results, or even proper reports, for months. It took a lot for me to overcome the socialization that teaches women to be agreeable and nice at all times. When I voiced my concerns and my thoughts with the contractor, I was met with responses such as, ‘You are a difficult client,’ and ‘You won’t be able to get the results you’re looking for with any agency,’” she recalls. “Despite this attempt to shame me and to use fear tactics, I was able to end the professional relationship. To do so, I had to learn to internalize that telling someone that I’m not happy with their work does not make me mean. I had to overcome a lot of messages that being firm isn’t acceptable for women.”

She ultimately realized that being uncomfortable for a short period of time in order to voice dissatisfaction was essential because it put her business needs first. Also, by eliminating a company that wasn’t meeting standards, she was able to find a company that was much easier to work with and engaged in open communication about expectations, disappointments, and successes.

Charlie Javice: Letting Go of Loyal Staff in Order to Pivot Her Company

It’s no secret we’re in the midst of a student loan crisis, and 26-year-old Charlie Javice has decided to tackle it head-on. She’s the founder of Frank, which to date has found students nearly $10 billion in financial aid. Her focus wasn’t always student loans, though, and making the decision to pivot her company in this direction came at a great expense.

“In June 2016, I had to make the tough decision to pivot my company’s direction from serving banking clients to serving students directly. This meant in addition to changing the trajectory of my business and starting over, I needed to let go of 11 amazing people, including a brilliant co-founder,” she tells us. “I knew that if I chose to pursue a new direction alone, I’d have to run in the red for many months with just the hope of convincing investors to eventually buy into my idea. I truly believed in our new product and fought to make it a reality, no matter the fact that most people believed I was chasing good money with bad money.”

But she learned that when you do right by people — and when you’re passionate about your mission — people will stick with you and believe in you, even if you fail. Her pivot wasn’t easy, but making that hard decision ultimately paid off.

“Now we have built a model that our investors believe in, and last year we raised $10 million in a new round of funding only six months after our first round of funding for $5.5 million, for a total of $15.5 million to date,” she says. “More importantly, we’ve helped 350,000 students access $9.8 billion in aid.”

Carolina Ramirez Herrera: Convincing Her Employer to
(Actually) Pay for her MBA

Carolina Ramirez Herrera is the founder of CRH Collective, a firm that specializes in public relations and marketing in the lifestyle sector. This was hardly a given; rather, it was the result of pursuing her education goals as an adult. In her 20s, Ramirez Herrera worked for a top media company in New York that offered to cover post-grad education costs for manager-level employees.

“I was flirting with the idea of getting an MBA, but I knew I couldn’t afford to just quit and be a full-time student, so this seemed like a perfect fit. I went to NYU, picked out my classes and was super excited to enroll in the fall semester. When I went to talk to my boss for payment, she informed me that the company only pays for the classes after they were completed,” she tells us. “I was so confused, as obviously I did not have a casual $10k laying around and surely neither did any other manager-level employees.”

Her boss was apologetic and understanding, but firm in her answer. Ramirez Herrera didn’t give up.

“I walked over to the senior vice president, explained the situation, and he said the same. I was not taking no for an answer, though, as I was already dreaming of starting my fall semester at NYU,” she says. “Long story short, I marched myself over to the president and explained my situation. I thanked him for offering this initiative, but told him that, operationally, it didn’t make sense. My recommendation was for the company to pay for the program up front, and if the employee doesn’t pass then they would be required to pay. I’ll never forget the look on his face. He said, ‘I guess that does seem fair, Ms. Ramirez. Talk to my assistant to draft this as the new norm and good luck at NYU.’”