Home Blog PEOPLE The Power of Mentorship: How a Network of Women Shaped Astrid Torres’s Future 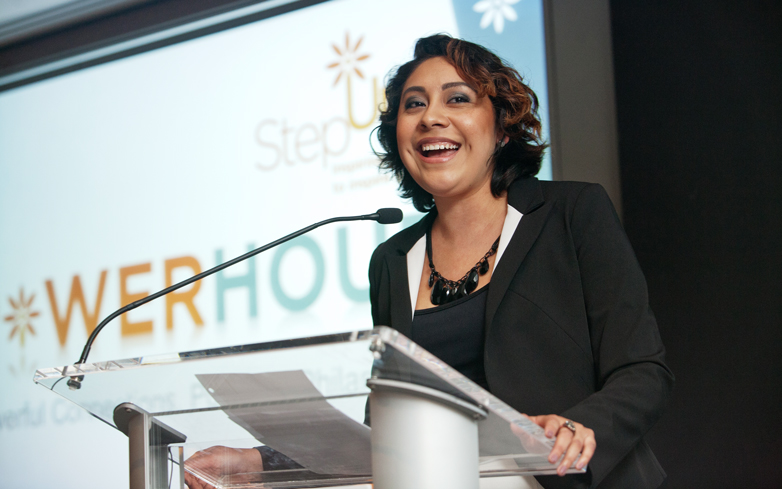 Every purchase on bareMinerals.com and in our boutiques benefits The Power of Good Fund, a women’s empowerment project that supports charities championing three key philanthropic pillars — women’s education, mentorship and entrepreneurialism.

Today, we’re sharing the story of Astrid Torres, 27, whose teenage years were transformed by the experience of mentorship. Astrid was first connected to successful career women — and ultimately a life-changing mentor — through Step Up, one of the non-profits we support through The Power of Good Fund.

The patio doors of Astrid Torres’s tidy, bi-level apartment are open, letting in the breeze and the sound of rain dripping through the trees in her lush yard. Seated on the couch, her work laptop is at the ready, but she’s taking a quick break from her job at Warner Music Group to talk about the role mentorship has played in her life — thus far.

Astrid was born on 101st Street in Manhattan, just a few blocks from the apartment she now shares with her husband. A first-generation Mexican American, Astrid was the oldest child, shy and dedicated to her schoolwork, motivated to stay focused by her mom’s frequent reminders: I’m here because I want a better future for you.

The future looked straightforward — local public schools, then enter one of the acceptable career fields of teacher, doctor or lawyer — until middle school approached, and Astrid’s mother announced that a new all-girls public school, The Young Women’s Leadership School of East Harlem (TYWLS), was opening for grades 6-12. And Astrid, skeptical or not, was going.

By the time Astrid was in high school, TYWLS was partnering with Step Up, a non-profit that uses a unique mentorship model to inspire teen girls in under-invested neighborhoods to achieve their full potential. Within the school, Step Up started a Young Luminaries Program, to help students get paid summer internships. Seeing the announcement, Astrid was drawn by the prospect of a paying job, and headed to the library for an after-school info session.

“I was a sophomore in high school,” Astrid recalls of her first exposure to Step Up, “and it completely changed me. I met women through their cocktail parties, fundraisers and panels. It was great exposure. We had workshops throughout the year to prepare us for our summer internships.” They visited the offices of Disney and Sports Illustrated and saw the infinite career possibilities before them. They each met with numerous professional women, following Step Up’s unique model of introducing girls to many mentors, who they call “possibility models” in order to give them varied voices and perspectives. “My mom’s an inspiration, but it wasn’t until I met these other women that I was like, ‘Okay, there’s many other opportunities for me out there that I’d never considered,’” Astrid shares.

The first internship Astrid secured was at Charity Folks, a company that auctioned celebrity experiences for a good cause. There’s a boldness in her voice when she recalls all she learned and did, which clearly exceeded her expectations for an internship, and, in many ways, for herself. After months of preparation during the school year, she felt unafraid, even though she’d never heard of celebrity auctions. The team was pleasant and welcoming, and told her she’d learn a little bit of everything and get her feet wet. “Oh my god — I got more than my feet wet,” she says, almost carried away by the memories. “I learned so much through that internship. I did everything.” She helped with outreach to publicists, and learned to keep track of leads with a spreadsheet (“I mean, I love organization, and little Excel sheets.”). When the winner of a Jonas Brothers experience only spoke Spanish, they asked around the office for someone who could manage the relationship. Astrid spoke up, and earned her first client. From shipping to customer service, she was exposed to every facet of the business in just a few months. “I felt like I was ready to take on the world. Like, ‘You know what? I’m good. Let’s go.’”

With a new outlook, she returned to school, and more Step Up events. At one, she was the only student bold enough to ask a question. One of the mentors was intrigued, and approached her after the session. The woman’s name was Joya, she worked in the music industry, and the two just clicked. A decade later, they’re still close. Joya is the reason Astrid went to college for arts management. Joya’s experience in a male-dominated industry inspired Astrid to put together a panel of women in music as her senior thesis. And when a position at Warner Music opened, Joya was Astrid’s reference.

Astrid joined Warner Music Group in December 2018. As a New Release Content Manager for their Warner-Elektra-Atlantic division, she codes information for new releases into systems that feed platforms such as iTunes and Spotify, and routes artwork between the art, legal and marketing teams. She loves the world of music management and is an obsessive networker. And now, when friends feel a bit lost in their career paths, they come to her.

“I always thought that I would be the one learning, not the one showing and teaching,” she says incredulously. But by now, several friends have asked her to “grab coffee” and she realizes it’s not just coffee. It reminds her of when she was younger and would reach out for lunch or an informational interview, so she always makes the time. Being a mentor still sounds funny to her — it seems premature — but she wants to open herself up. “My mom is always like, ‘Give to others and eventually you’re going to be blessed with more.’ It’s the way it works. So I do want to mentor more. I want to make it a priority for me. Perhaps I’m not the best mentor right now, but little-by-little, I think I will be able to help someone out.”

She has certainly had a strong example. From Joya, Astrid has learned to stop apologizing constantly, as she’s just putting herself down a little bit every time. She’s learned to keep in touch (“It’s brought me a long way, to keep in touch”). And she’s learned to be dedicated and do what she truly loves, since the alternative could never end in happiness.

“I just think she’s taught me so much,” Astrid says of her mentor. “These little things that she probably doesn’t even know. She does it without knowing, but they’re valuable things.”

Learn more about Step Up’s unique mentorship model, and The Power of Good Fund by bareMinerals.