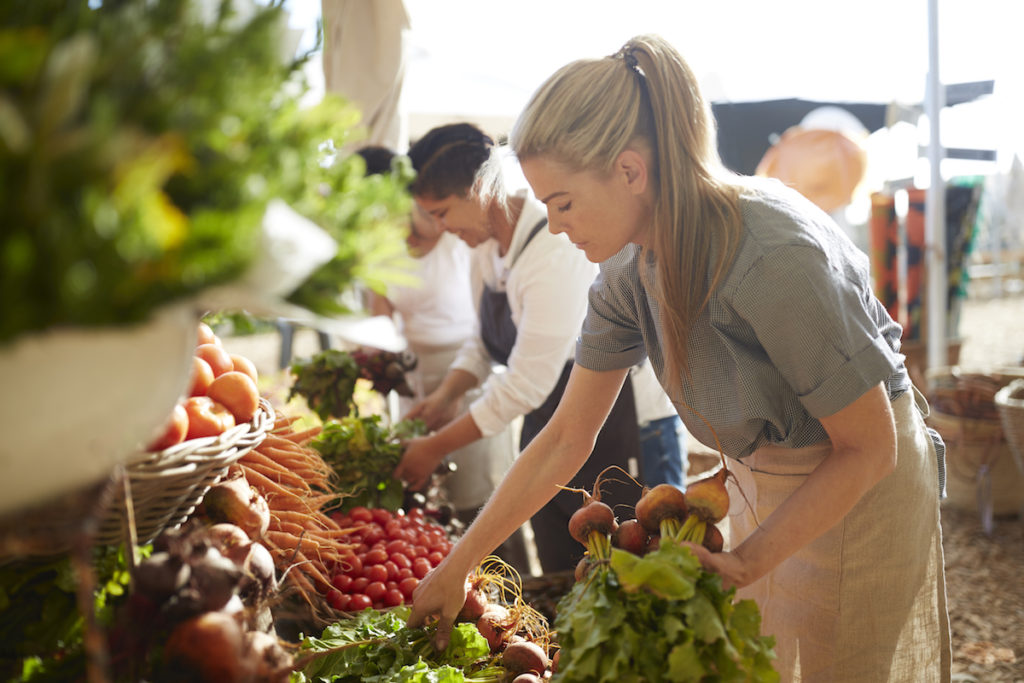 We’re encouraged to make clean choices when dining out, and prepare clean meals when eating at home, but when a food journey begins at the a grocery store, that leaves a big (important) question: how does one actually shop clean?

“Clean eating” can mean different things to different people, but it’s important to clarify some of the basic elements so you know how to stock up on “clean” foods. As a rule, the term usually refers to eating wholesome, uncomplicated foods that look a lot like they did before they were put on your plate. Clean eating does not necessarily mean eating “raw” foods, but rather avoiding preservatives, artificial coloring, or other additives (like added sugar) and focusing instead on fresh, colorful groceries comprised of mostly plants and natural proteins. Clean eating is a great way to kick start a healthier, more self-care focused lifestyle, while enjoying more energy and mental clarity.

“The definition of clean eating is in the eye of the beholder and the company that’s creating the product,” says Bonnie Taub-Dix, RDN, creator of BetterThanDieting.com, and author of Read It Before You Eat It – Taking You from Label to Table. Although there is no formal definition as far as USDA or FDA definitions, Taub-Dix says: “For me, clean eating is not just about a short [ingredient] list … as much as what is actually on that list and where certain ingredients appear on that list.”

To learn more about navigating ingredient lists and grocery aisles, here are some tips from the pros.

How to Plan for Grocery Shopping

To begin, a shopping list is a great idea. Starting with a list of clean, unprocessed foods, including lots of fresh fruit, vegetables and lean proteins, will help you stick to your plan once you get to the store. Also, pre-plan a few dishes for the week (zoodles, salads, soups and crock pot meals: we’re looking at you!), and stock up on what you need to execute, focusing on a few overlapping recipes that will get you more mileage out of your groceries. Additionally, fresh herbs are always a good idea, as they add flavor without relying on lots of salt or seasoning packets.

What is Shopping the Perimeter?

“This has been said many times before but it is true: shop the periphery of the supermarket. That is where the fruits, vegetables, nuts, and butcher are — stuff that needs no labels, because they are one ingredient.” says Danielle Hamo, RD LD/N. “I get most of my stuff from there. I load up on fruits, vegetables, fresh fish, skinless boneless chicken breast, eggs, plain Greek yogurt and nuts.”

On the flip side, be wary of the middle of the supermarket. That’s home to cookies, crackers, and all the packaged and boxed stuff. “I limit the things I get here. For sweets, I stick to plain dark chocolate, 70% cocoa or higher,” says Hamo.

If you do buy packaged products, note that the ingredient list is written in order of weight; the first ingredient is used in the greatest amount and the rest are written in descending order by weight. “You want to avoid products that name sugar, in any of its forms, as the first or second ingredient on a label,” says Hamo.

What Do Food Buzzwords Really Mean?

A product that boasts an array of dietary terms on its label could be costly, and doesn’t always mean that it’s clean. It’s important not to be duped into thinking that a product is healthy simply because of marketing terms on the label.

“A food ‘free from gluten’ says nothing about the food’s profile, meaning that it could be high in sugar, salt and additives and preservatives that are far from clean,” says Taub-Dix. Besides, unless you have a medical condition or intolerance that prohibits you from eating gluten, gluten is not a harmful ingredient. “A product that is ‘fat-free’ could be overloaded with sugar,” continues Taub-Dix. “Something that is ‘organic’ could be filled with unhealthy fats and sodium.”

Taub Dix goes on to say that manufacturers can similarly use the term “sugar-free” if the product has less than 0.5 grams sugar per serving. “Keep in mind that as your servings size goes up, so do your grams of sugar,” she says. “’Calorie-free’ means less than 5 calories per serving. Fat-free means less than 0.5 grams fat per serving but, as with sugar, you need to pay attention to how many portions you’re having, especially when serving sizes on the label are unrealistic.”

Other confusing food terms? “Light” if you are referring to bread could mean that the light bread is half the calories of its counterpart, while light olive oil is lighter in flavor and color than the real deal, but the same calories. In other words, you need to look beyond a flashy front of package and read the nutritional facts panel and ingredient list to see what you’re really getting.

How to Choose Fruits and Vegetables

Eating seasonal fruits and vegetables is an important first step in eating clean. This handy guide can help you navigate which produce to favor each season. And it’s more than being healthy — it’s also a better buy. In general, if produce is in season, it will be cheaper. For example, berries can vary from just a few dollars to double when they are not in season. Plus, in-season produce is generally more flavorful. When you’re making your grocery list, take a minute to research what’s in season, and you’re less likely to be disappointed by produce that’s wilted, low on flavor or out of stock.

When it comes to picking produce, most clean eaters would consider organic produce to be the way to go, as it’s grown without the use of pesticides, synthetic fertilizers, sewage sludge, genetically modified organisms, or ionizing radiation. The word “organic” doesn’t speak to the nutrient profile of the food though — it’s all about the way the food is grown, and you can find that out just by reading that little sticker on the fruit or vegetable! “The codes on organic produce begin with the number 9. Conventionally grown produce codes begin with the number 4,” says Taub-Dix.

Should You Avoid the Deli Counter?

When it comes to deli meat, the combo of the sodium, sugar, additives and preservatives should give you pause. “Sugar and sodium both increase the risk of diabetes, obesity and hypertension,” says Taub-Dix, adding that a product is considered to be ‘low sodium’ if it contains 140 mg sodium or less per serving. According to the Dietary Guidelines for Americans, the recommendation for sodium is around 2,300 mg per day, so those numbers add up quickly when an average slice of deli meat could contain upwards of 300 milligrams of sodium per slice.

“Nitrates and nitrites in deli meat need to be taken into consideration as well — most clean eaters try to steer clear of these preservatives,” says Taub-Dix. Nitrates or nitrites are used to cure processed meats like bacon, hot dogs and most deli meats. “In addition to imparting a salty flavor, they also keep meats from growing harmful bacteria,” says Taub-Dix. However, the World Heath Organization has issued warnings about deli meat being carcinogenic, so it’s definitely worth reading up — and potentially changing your habits. “It’s good idea to put deli meat into perspective. If you were eating deli meat containing nitrates and nitrites on a daily basis, perhaps you should consider changing up your sandwich or salad for something that has less of these potentially harmful additives,” says Taub-Dix.

Is it Safe to Eat Fish?

When it comes to choosing seafood, whether farmed or fresh, the benefits of low calorie, high quality protein rich in omega-3 fatty acids outweigh the potential negative risks. “Try to have a variety of the types of fish you consume and avoid those that are highest in mercury and remove the skin and visible fat,” says Taub-Dix.

Note that the USDA has never defined organic as applied to seafood, so it is an unregulated term. “Individual companies may choose to mention that their seafood is raised in controlled environments, free of antibiotics and chemicals and fed organic feed,” says Taub-Dix.

If you’re concerned about the source of your fish, and making ocean-friendly choices, the Monterey Bay Aquarium Seafood Watch provides a reputable tool where you can learn about the impact of different seafood on the environment, and other wildlife.

Frozen foods often get a bad reputation because of the association with old school TV dinners that were typically loaded with sodium and made with questionable ingredients. But the food industry has come a long way and many frozen foods are just as healthy (if not more so) than their non-frozen counterparts.

“You can find tons of very unhealthy and highly processed frozen foods, the same way that you can find very unhealthy and ultra-processed NON-frozen foods,” says Alix Turoff MS, RD, CDN, CPT Registered Dietitian, Nutrition Consultant & Certified Personal Trainer. The truth is that frozen foods can make eating healthy so much easier and more realistic. Not everyone has the time (or desire), to whip up a fresh meal from scratch every day.

“Frozen burgers (chicken, turkey, salmon, veggie, etc.) are great to have in the freezer for a night when you don’t have any protein on hand. Read the ingredients and go with something that has good nutrition facts,” says Turoff. “Pair your burger with some frozen veggies (so many companies are making innovative blends and mixes, mashed cauliflower, butternut squash puree, cauliflower rice stir fries, etc.). You can then add a carb on the side to round it out (frozen rice, quinoa, a bean blend, sweet potatoes, etc.)”

The freezer is another place to get your produce as well. “I always encourage people to go for frozen produce because it’s picked at the point of ripeness and frozen so you’re getting the best quality without the hefty price tag!” says Turoff. Plus, if your local winter produce consists of apples and onions, this aisle is definitely one to keep in mind!

And with that, happy (clean) shopping!