Home Blog PEOPLE The Power of Giving: How a $1,500 Loan Transformed 2 Sisters’ Businesses 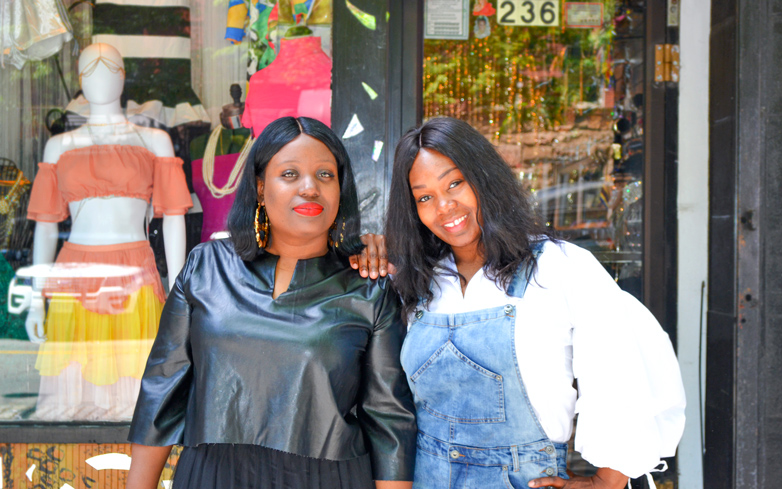 Every purchase on bareMinerals.com and in our boutiques benefits The Power of Good Fund by bareMinerals, a women’s empowerment project that benefits charities that champion three key philanthropic pillars — women’s education, mentorship and entrepreneurialism.

Today, we’re giving you a look inside the world of two entrepreneurs in New York City whose businesses and lives have been changed by Grameen America, one of the non-profits we support through The Power of Good Fund by bareMinerals.

Behind a narrow storefront on a small commercial strip of West 135th Street in Harlem, Janine Smalls-Gueye was at work in her shop one day in 2017 when a confident, fashionable woman walked in.

Her name was Latonia Green, and she swept around the colorful boutique packed with a mix of elevated streetwear, tees and vintage finds from Educated Fashion Addict, the brand Janine runs with her sister, then proceeded to declare her love for certain garments, Janine recalls. “And then Ms. Green leaned into me, she folded her arms and she was like, ‘You ever heard of Grameen America?’”

Janine had not. “Ms. Green was like, ‘Well, let me tell you a little bit.’ And she pulled out her card.”

Latonia Green is the Harlem branch manager for Grameen America, a non-profit microfinance organization that gives short-term microloans to female entrepreneurs. In the U.S., women receive just 4% of small business loans from mainstream financial institutions; Grameen America has distributed over $1 billion in microloans over the last 10 years, with an average loan amount of $3,300. They do not require a credit check. They do, however, require that women form a group of five before applying together; while the loans are granted individually, getting a second loan is dependent on the entire group repaying their first loans on time. These groups meet weekly to repay their loans, learn how to improve their credit scores, and build a local community of female entrepreneurs who support each other through thick and thin.

In the boutique that day, the program was explained to a very skeptical Janine, who recently recalled her first impression: “You’re telling me you want to give? You don’t have to run my credit?! You don’t have to do a whole background thing? It’s going to help me build my credit and it’s going to give me money?!” Janine was unsure — the program sounded too good to be true.

As skeptical as Janine was, she didn’t lose Ms. Green’s business card. Soon after, both Janine and her sister, Lanise Herman-Thomas, were discussing how badly they needed to add a payment terminal and small counter to their shop, but they were struggling to save for the upgrades. So Janine hesitantly mentioned their stylish visitor and began to research the Grameen America program. The sisters applied for their first loans in early 2018 — Lanise for Educated Fashion Addict, and Janine on behalf of the non-profit afterschool program they also run, Young Excellence Society.

That first Educated Fashion Addict loan was for $1,500, which Lanise was able to recoup in profits in just two weeks, after using it to purchase an iPad, a point of sale stand and the counter it now sits on. Before Grameen America, the shop had been taking credit card payments using an app on their personal phones, but their clientele did not trust it. They were painfully familiar with people promising I’ll be back — I just need to get cash and never returning. “So that loan we got,” Lanise says. “Changed our lives,” Janine answers. They have been proud members of Grameen America ever since.

If you walk out of the Educated Fashion Addict boutique, leaving the bright pink awning and playfully styled mannequins, and cross 135th Street towards St. Nicholas Park, Janine and Lanise have a second business, a non-profit called Young Excellence Society (YES), which is supported in part by Educated Fashion Addict profits. YES offers afterschool and summer programs that aim to improve academic performance and provide a safe, structured environment for the children of working parents. YES partners with the academically-rigorous Success Academy Charter Schools, where Janine is a mom. Many of their students are first generation, and as a result, language barriers can make getting homework help from a family member challenging. YES works to ensure children feel independently confident in their academic abilities. On a typical day, the grade schoolers in Janine’s program spend an hour on homework before transitioning to recreational activities; their Harlem location is filled with cabinets of arts and crafts supplies and STEM projects, which they purchase with loan capital from Grameen America, plus foosball tables and a giant Connect Four.

On Wednesdays, when Success Academy lets out at 12:30 — a strain on working parents — they use the extra time to do “intervention.” “So, any kid that’s struggling academically, we want to focus on that — and we focus as a group,” Janine explains. “We do peer mentoring … because sometimes as adults we can teach children [but we] don’t get through. But when your friend is talking to you it’s like, ‘Okay, that makes perfect sense’ … so we see that peer mentoring works really well. We do an hour of intervention, [then] we work on sight words and we work on math because our kids — when I was telling you it’s rigorous, they get 60 seconds to do 24 math problems. 60 seconds. That’s what Success Academy is.”

“But they can do it!” Lanise insists proudly.

There are over 30 Success Academies in New York City, and Janine just opened a second location of YES inside a school. They’re already talking about two more. YES does a summer program now too, where they bring kids to each borough to visit museums, and teach them about healthy eating (Janine’s graduate thesis was on childhood obesity). YES employs around 15 people during the academic year, increasing to 22 during the summer to ensure the children’s safety on field trips. During the day, when the foundation’s spacious white headquarters are quiet, Janine wants to work with young adults in the community and provide GED and work readiness programs, with the goal of showing them positive paths. She’s eager to walk around the streets and connect with people — she lays a hand on her sister’s forearm to demonstrate, looking into her eyes and speaking with a gentle intensity: “Hey, you, what’s going on in your life?”

Growth is on the horizon for both of the sisters’ endeavors. They have plans for an upscale line, L & J, and are pivoting Educated Fashion Addict to focus on their own branded items, which ring with positivity. Some of their most popular items are tees that say “Be Kind” or “I’m a Goal Digger.” “We’re big affirmation people,” Lanise explains. “We love speaking positivity into everyone we encounter.”

With Grameen America, Janine and Lanise are looking forward to accessing larger loan sizes, which the program offers each 6-month period, as the sisters have grand long-term plans. Lanise concedes the structure of the Grameen America program required work — each member must be diligent. “The era we’re in now, everyone’s looking for instant gratification. But that’s not how you build a solid business,” she says. The sisters, who share a father but grew up in different boroughs with their respective single moms, have no issue putting a lot into being entrepreneurs. “The hustle was always in us,” Janine says, as Lanise nods. “We were bound to hustle, but the right way [because] our mothers were smart, our mothers who were our direct influencers.”

Now they are 42 and 39 years old, and still their mothers’ daughters. “Let me tell it: we know for a fact that with our [Grameen America] group, a lot of them look at us as their motivation,” Lanise says. They don’t brag about having two growing businesses though — they’re honest about the work that goes into them. They’re honest about the moments they didn’t pay themselves a salary because their businesses’ insurance bills were due. And with time, they have seen the women from their Grameen America loan group become more financially independent as they continue to lean on each others’ strengths.

There’s always more to learn though — next on the collective agenda is getting educated on retirement investments. “We’re trying to create legacies for our kids,” Lanise explains. “That’s what we’re creating.”

Get to know Grameen America’s leadership and learn more about The Power of Good Fund by bareMinerals.