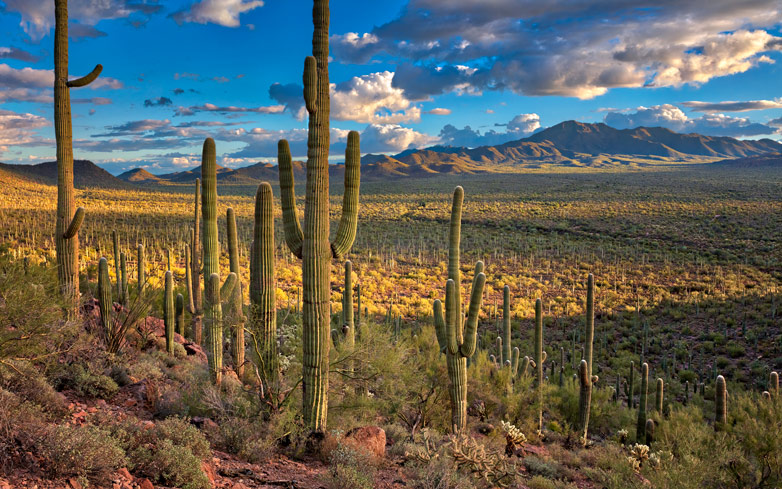 Yellowstone. Glacier. Zion. Yosemite. While these giants are must-visits at some point in your life, sometimes it’s nice to wander toward a path that’s not quite so beaten. You might be surprised to learn that the United States has 62 official National Parks scattered across the country (and technically a dazzling 423 national park sites), and each one earned the designation by being an extraordinary site. Below we’ve highlighted a handful of the less familiar National Parks that are just as worthy of your bucket list — just in case you don’t feel like taking in nature’s wonders in a crowd this year.

In 1938, the ethereal, other-worldly landscape of White Sands was declared a ‘national monument’ by President Herbert Hoover. However, it wasn’t until 2019 when it was formally re-designated as a U.S. National Park. This gypsum dune field — the world’s largest — is 275 square miles of pristine white desert. It’s beautiful all day long, but absolutely glorious come dusk and dawn. It can be a bit disconcerting if you wander too far since there aren’t really any points of reference, so make sure to stick close to the road when visiting. Oh, and come prepared for some sand-sledding!

Gates of the Arctic National Park and Preserve in Alaska

Perhaps because of its remote location, Alaska’s Gates of the Arctic National Park receives fewer than 15,000 visitors every year. That doesn’t mean it isn’t jaw-droppingly beautiful, though! This massive park, situated squarely on the north of the Arctic Circle, spans over 8.4 million acres of stunning preserve. It boasts peaks, fjords, wild rivers, glaciers and valleys that have remained virtually untouched by humankind. Getting there requires a flight in from Fairbanks, though the roughest of them opt to hike. The long summer days make for ample opportunity to spot wildlife — including grizzly bears, wolves, caribou, moose and fox — and winter’s darkness provides an opportunity to catch a glimpse of the shimmering auroras.

Forget Disney World for a second. Everglades National Park is a natural “theme park” teeming with wildlife, stunning views and outdoor adventure. The National Park stretches 7,800 square miles across the southernmost, island-laden tip of Florida, and is home to 36 rare and endangered species, including the manatee, American crocodile and (rarely seen) Florida panther. Bottlenose dolphins, herons and egrets also flourish in the saltwater mangroves here, which you can explore via canoe or kayak. The Everglades are the only subtropical preserve in all of North America, which makes it a particularly special spot, especially if you’ve already checked most parks off your list.

You might just feel like you’ve inserted yourself in a Nicholas Sparks novel while visiting North Carolina’s stunning Crystal Coast. At the Southern tip of this 85-mile long, narrow island you’ll find Cape Lookout National Seashore, a stunning (and remote) national park that’s accessible only by boat. While ferries run routinely throughout the day, the Seashore still manages to feel like another world entirely, and it’s renowned for its sparkling beaches, bird watching, wild horse watching, shelling, fishing and even camping. Of course, there’s also the majestic black-and-white checkered lookout tower. There’s also a nearby house-turned-museum, and you can climb to the top of the lookout itself for sweeping views.

Did you know that the tiny state of Virginia is home to 22 National Parks, sites and monuments? Shenandoah National Park is not only one of the most beautiful — it’s arguable one of the most accessible. It boasts the 105-mile long Skyline Drive, a fully paved National Scenic Byway that allows you to easily discover its beauty from your car. It’s also home to the crest of Virginia’s Blue Ridge Mountains and the famed Appalachian Trail parallels the drive as well.

If you’re visiting Arizona, there’s a good chance there are two must-sees are on your list: The Grand Canyon and cacti. The former is one of the most widely visited sites in the entire world. The latter is easy enough, but to really throw yourself into the thick of it, schedule a visit to Saguaro National Park. Located near Tucson, AZ, the park’s 142.9 square miles are filled with the state’s iconic, tree-like cacti. These majestic plants can live to be up to 200 years old and reach up to 60 feet tall, which makes them a truly memorable sight to behold.

Minimal, Multi-Tasking Essentials for Your Next Spontaneous Beach Trip