Home Blog PEOPLE Room to Read’s CEO Talks Big Choices, Gender Equality, and How You Can Improve the World — Today 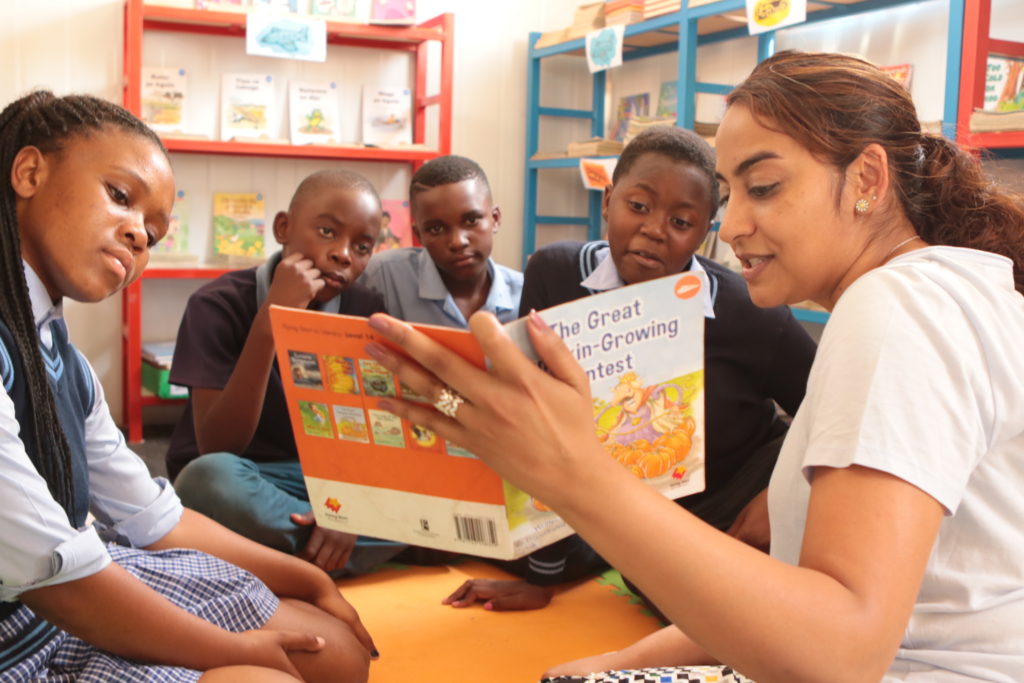 In April 2019, we launched The Power of Good Fund by bareMinerals, which supports women’s empowerment through education. In this series, we’re putting the spotlight on one leader from each organization. Today, we’re proud to share the story of Geetha Murali, the CEO of Room to Read, which is a non-profit focused on increasing literacy and gender equality around the world.

We’re all where we are because of millions of choices. It’s often difficult to point to which ones changed the trajectory of a life, but for Dr. Geetha Murali, CEO of the global education non-profit Room to Read, the single most important decision of her own life is clear. It actually came 25 years before she was born, when her mother said “no.”

Geetha’s mother, Rukmini, was growing up in India, in a family and community in which child marriage was accepted. When she finished high school, Rukmini was pressured to marry, at the age of 13. While the situation was common, the outcome was not; she successfully refused, going on to join the Indian Army, train as a nurse and move to the United States. Rukmini changed the trajectory of her own life, but as the oldest of 7 children, her decision reverberated around her family, too. After her stand, they no longer participated in child marriage; instead, the girls of her family continued their educations, going on to careers at the U.N., in medicine, and more.

Needless to say, when she had her only daughter, at age 38, Rukmini felt a deep urgency to educate her. With no resentment, Geetha speaks to how she was expected to learn a lot — and fast. There was a nervousness, Geetha recalled, driven by the sense of loss of opportunity in the lives of generations of girls before her. Rukmini wanted her daughter educated as quickly as possible — and armed with life skills — as she grew up between the United States and India.

Multiple master’s degrees and a Ph.D. later, Geetha is running Room to Read, a 21-year-old organization founded on the belief that “World Change Starts with Educated Children®.” The evidence-driven non-profit has experimented greatly and settled on two areas with the greatest impact: early grade literacy and gender equality through education. They work globally, partnering with governments to implement change. Internal and external evaluations have proven that their programs are responsible for children reading two to three times faster — in the same school environment as control schools, with similar cost structures as government programs, and their program significantly reduces dropout rates.

The myriad challenges that girls, in particular, face in getting an education have been well-documented. The primary obstacle doesn’t seem gender dependent. “The most glaring challenge,” Geetha says, “is poverty, and the inequity that is inherent to being poor… [poorer families] will tend to be more food insecure, they will have less access to healthcare, and it is really difficult to prioritize your child’s learning. When your family is hungry or malnourished, or you have to work multiple jobs, it is hard to advocate for your child in school, or encourage them at home.”

But this common global challenge is even more of an obstacle for girls. “In a lot of these communities,” Geetha explains, “women tend to be the ones who will give up their own dreams and aspirations for the family’s welfare…taking care of younger siblings [for example]. If the family is concerned about safety and there is long travel to school — in those cases, you can’t really fault the parents for making what they think is an informed decision about keeping their girl at home and safe, as girls tend to be more vulnerable in situations where there are predatory activities like trafficking or prostitution.”

So why worry about educating a girl in the first place – particularly if there is inherent risk in leaving the house? And why bother teaching a girl about making informed choices, if that feels so far off in her community? Well, change has to start somewhere. An educated girl, Geetha explains, “has the opportunity to support herself and advocate for herself. She has more information about her rights.” The community as a whole benefits, too. “We know so many things about the advantages of girls being educated and being leaders. We know that we’re going to have healthier communities, higher GDP. There’s all this research about — even in the corporate world — innovation and profitability, and the way governments are run [differently].”

Any CEO in global education can share metrics about GDP increasing and child mortality decreasing when girls are included in the efforts. But what you won’t get from most CEOs is what Geetha lands on, stepping out of presentation mode: “All of those are great reasons, to support girls’ education. What I find challenging is that those are all somewhat utilitarian, in the way that we describe them. I always come back to a person’s dignity, the individual human being. Don’t I deserve to be informed, to exercise my rights simply because I’m a human and I exist on this planet — in a society that claims I deserve those rights?”

Geetha is not someone who forgets the individual, in light of all the big-picture thinking she does while leading an organization. She sees the forest, she sees the trees.

There comes a point in every modern non-profit’s story where Covid-19 emerges, and a pivot is necessary — all while the team is struggling to accommodate changes and fears in their own lives (Geetha, for one, underwent emergency spinal surgery and had to re-learn to walk in the midst of the shutdown). Room to Read found that when in-person learning halted, half the children they served were at risk of dropout, due to loss of income or an inability to continue learning at home. “Our unit of measurement was no longer the school,” she says, “but the household. And we had to reach children wherever they were, by whatever channels available. While a lot of the world immediately turned to the internet, 50% of children around the world didn’t have access. Even if they did, imagine a home that has a single cell phone. It’s not going to be used by the 5- or 6-year-old.” They pivoted to what most children did have: radio, delivering programs over the airwaves, and using phone calls and video text messages to communicate with parents who are illiterate. They partnered with food security and health organizations to physically get learning materials into households. All while communicating with their own teams about the inherent risk of continuing to operate.

Room to Read knew it couldn’t slow operations; the more children they reach daily, the more choices they impact. And Covid-19 didn’t stop the girls they serve any more than it stopped them. Geetha shared that during the lockdown, a 15-year-old girl named Roshni, from the Chhattisgarh state in India, learned that a young girl in her village was subject to an upcoming arranged marriage. She had experience in life skill and competency training from Room to Read, so she did what Geetha’s mother, Rukmini, did: she saw a different path. With support from her Room to Read mentor, Roshni reported the engagement to authorities who had the power to intervene. In essence, Roshni just helped the little girl say no.

Chances are you are reading this far from Chhattisgarh, India. You are probably not an extraordinarily brave and bold 15-year-old girl, aspiring to be a police officer, and speaking up for girls without a voice. But if Roshni’s action sounds dramatic, unattainable or irrelevant to your life, there are still important, life-changing choices you can make today to support gender equality: just talk to a man about this issue. Or simply read to a girl.

“I can’t tell you the number of women’s networks events that I’m invited to, where I’m talking to a bunch of women who believe in what I’m saying already, and are exposed to it and know it and feel it,” Geetha says. She cannot stress enough the importance of inviting your male allies to share in those conversations, to have their eyes opened and understand tangible steps they can take in the workplace and in life.

Her other suggestion is perhaps even more approachable. “Start with helping one person, one perspective, one girl’s life, right? Maybe your own daughter, or maybe a friend’s daughter — any one child. And then another. You can do something as simple as reading your daughter a book that questions gender norms… the stereotype of a princess… just one book that changes the way she looks at herself,” Geetha says. “I think if you start with one, you see the change you can make, and many more will follow.”

Learn more about The Power of Good Fund, and how your bareMinerals purchase supports Room to Read.