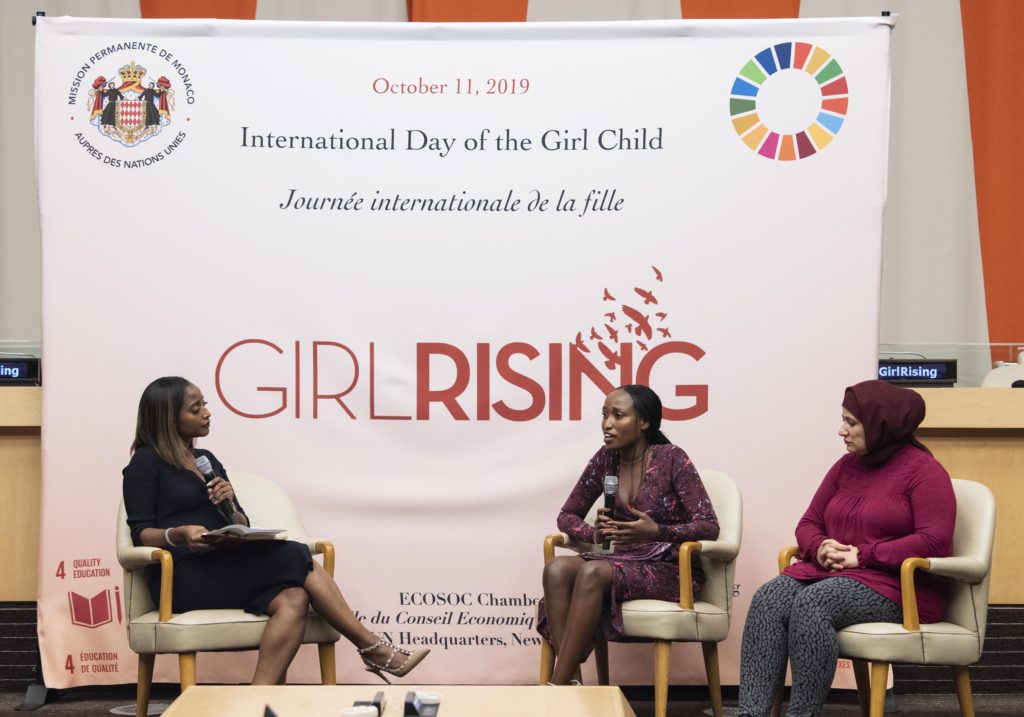 “This evening is about sisterhood and commitment,” H.E. Isabelle Picco, Ambassador of Monaco to the United Nations, declared to 400 people of all ages and genders on Friday, October 11. In a large chamber within UN Headquarters, Ambassador Picco continued by introducing the women participating in the evening’s event — and describing the commitment it takes to face adversity and educate girls around the world.

The event, hosted by our non-profit partner Girl Rising in celebration of the International Day of the Girl Child, featured a special screening of their latest documentary, Brave Girl Rising, followed by a panel with two women who are former refugees.

Before the screening, Girl Rising CEO Christina Lowery spoke about the film’s inspiration. “We believe the world needs to know about the challenges girls face,” she said. “We believe the world needs to pay attention.” As for the name Brave Girl Rising? According to Christina, the crew asked all the refugee girls what they would call their autobiographies. For the subject of this film, a refugee girl named Nasro, it was simple: “The bravest girl in the world.”

The lights dimmed and a hush came over the room as Brave Girl Rising began. The short film tells the story of Nasro and her educational journey in 5 poems. Twenty powerful minutes later, the lights came up in the chamber, and the panel discussion began.

Former CNN correspondent Isha Sesay opened by asking the panelists, Sandra Uwiringiyimana and Nargis Bigzad, for their reactions to the film. Both related their own experiences as former refugees to Nasro’s. “My heart was beating so fast the entire time,” Sandra said. “I never dreamed of leaving my country. It was the best times of my life.”

While no two refugee experiences are the same, the panelists agreed about the importance of educating women. “Education was the only stable thing I had in my life [prior to becoming a refugee],” Sandra said. “As humans, we should support each other,” Nargis said.

And the key to doing just that? As Dana Sleiman, Senior Public Information Officer for the United Nations High Commissioner for Refugees, explained, it’s all about collective action. Because of the awareness shed from efforts like Girl Rising, Dana shared that refugee enrollment in primary and secondary education has recently increased. But, in order for this to continue, Dana stressed, we can’t ever stop pushing for change.

We want to help Girl Rising spread the word about girls’ education. To empower women through education, mentorship and entrepreneurialism, we will support The Power of Good Fund by bareMinerals by donating 1% of sales from our boutiques and bareMinerals.com to Hopewell Fund.*

*Donations will be made on sales, less any returns or discounts, starting April 1, 2019 through December 31, 2020 and include a minimum contribution of $1,000,000. Hopewell Fund is a 501(c)(3) public charity that specializes in helping donors, social entrepreneurs, and other changemakers launch new, innovative social change projects.

The Best Ways to Celebrate Women This Month (and Beyond)