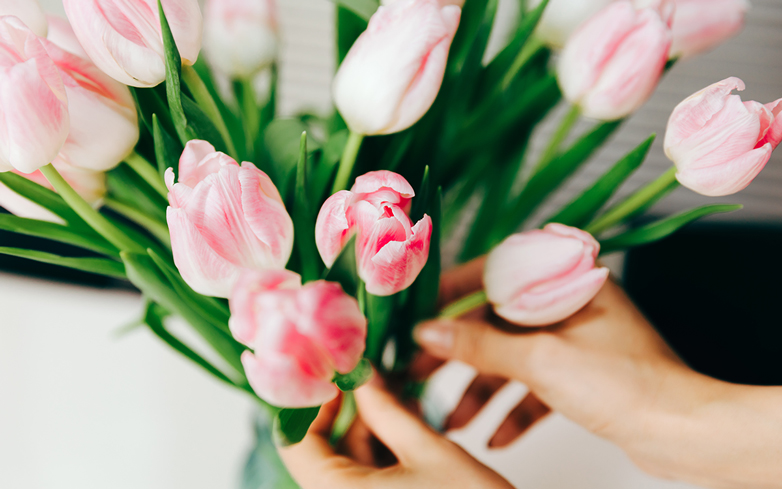 We talk a lot about THE POWER OF GOOD. First, we have our products, which are full of what’s good and free of what’s not. And when you buy those good-for-skin products, we donate to The Power of Good Fund by bareMinerals, a women’s empowerment project that supports education, mentorship and entrepreneurialism. We’ve been Creators of Clean Beauty for 25 years, and in that time, so many people have shared powerful stories with the world, telling how our clean formulas transformed their skin. But there’s also a lot of goodness that happens behind the scenes. Here are just a few recent stories from our team that really embody THE POWER OF GOOD. Grab a tissue…

The Isle of Man where I live is a small island in the middle of the Irish Sea, halfway between the U.K. and Ireland. We have been hit recently by storm after storm, and it was during one of these stormy evenings when the store was almost empty that I saw the lady standing in the self-select makeup area beside my counter. As she stood staring at the makeup, I noticed she was brushing away tears. She was wearing a lightweight jacket and dress that were more suited to summer than for the hail that was falling outside. I felt I needed to let her know that someone was there for her, so I took a tissue and handed it to her and asked her if she wanted to sit down and talk.

She accepted my tissue and sat at my counter. In her own time, she told me her story. She had split up with her boyfriend, walking away and leaving her clothes and makeup behind when she had discovered he was cheating on her. She had to give a work presentation later that evening and couldn’t find anything to wear — it was a week before pay day and she couldn’t afford to replace her wardrobe and makeup.

I offered to do her makeup and she started to cry again. She had no makeup on, and told me that she didn’t wear a lot as she never knew what to do. I showed her all our products and I chose for her the COMPLEXION RESCUE Hydrating Foundation Stick and BOUNCE & BLUR Blush in the shade Pink Sky, and I did a wash of color over her eyes, from the GEN NUDE Eyeshadow Palette in Rose.

As we chatted about skincare and makeup she started to relax and enjoy herself. She loved the look and couldn’t stop smiling at her reflection in the mirror as I applied her lip gloss.

When we were finished, I told her to think positive thoughts about finding her outfit for that evening and that she would find exactly the right thing at the right price. She started laughing at me and gave me a hug as she left the chair, apologizing that she wasn’t able to afford to buy anything from me. I told her it didn’t matter and as she walked away smiling, I felt grateful to have played a part in cheering someone up.

An hour later, she came back. She was absolutely beaming as she showed me the two perfect dresses she had found in a charity shop. She proudly asked if she could buy the MOXIE Lip Gloss she was wearing, as she hadn’t had to spend as much as she had expected to on the dresses. And she bought me flowers. A beautiful bunch of tulips.

This time it was me wiping away a tear in self-select, touched that someone with so little could be so generous.

The Best Wrong Number I Ever Answered

I received a phone call one day 9 years ago from a woman who was VERY upset that she was having trouble reordering her bareMinerals. She said she bought a ton of product and just wanted to reorder. She did not remember WHAT she purchased, but wanted exactly the same items.

Well, after a bunch of questions and confusion, I found out that she had ordered from an infomercial and when she called to reorder, she somehow got our number [at the bareMinerals boutique in Palm Desert, CA]. She then apologized to me and explained that she had a traumatic brain injury and has a hard time remembering things and also has trouble dialing a phone. I told her that I felt super confident I could get her the products she wanted if she would be willing to do a phone consultation. She was IN. She may be forgetful, but she is a makeup queen and knows EXACTLY what she likes: NO shimmer, ONLY matte finish, taupe with NO purple or red undertones AND really dry, unquenchable skin.

She was talking my talk and I knew we were kindred spirits. She made a sizeable purchase and I assured her that I would ship it (turns out the call was coming from New York), and if anything was not to her liking we would make it right for her. I called a week later, and she still had not received her package. I called back a week later and she said she got it but had not had a chance to dive into the box.

Two weeks passed before I called again and she YELLED at me! She had been waiting for me to call back, as she had lost my number and could not figure out how to get in touch. She LOVED EVERYTHING and was in disbelief that we got everything exactly right and she wanted to order more! We made a date, and I now call her at least once every 2 weeks. She and I have been through a lot together. Her son going to medical school and becoming a surgeon, her husband’s cancer diagnosis, her son getting married, her husband passing away, the birth of her grandchildren, her illnesses. She has been through it all, and has has found strength and the will to keep going through her self-care. Her bareMinerals has been a huge part of that process. When I would call and she would be at her lowest, I would tell her: get up, get in the shower, get your skin care on and crawl right back in bed! She would do exactly that, only next time after her skin care, she would feel a bit better and put on her makeup and get dressed and rest on the couch and see visitors. I love this woman and call her a friend — a friend I have never met in person. I see her fighting spirit and positive attitude, and she inspires me. I tell her that she is the best wrong number I ever answered.

Never Underestimate the Power of Kindness

The following letter was sent to two of our associates in early March 2020.

I would like to thank the girls that were at the store on Saturday night. First there was Chloe, the one that color matched my daughter with the correct powder foundation and made her feel beautiful. Then there was the sweet girl, Maddy, that I think is newer but just as nice and so complimentary to my daughter.

You see, last night was the first night we got my daughter to go out of the house. She has been suffering from extreme depression and anxiety for the last several months and, the last four weeks, has been in an outpatient program instead of going to school.

But last night, for that short time that you were with her, you made my daughter feel and look beautiful. Something she has not felt in a long, long time. So I want to thank you for your act of kindness. You had no idea at the time and you were just there being your awesome selves. But the difference you made may last a lifetime. My daughter felt amazing and I did also, seeing that wonderful smile on her face. My husband was so happy he teared up when we left your store! Please know that you can make an impact in someone with every encounter you make.

Thanks for being who you are and never underestimate each encounter you have with a client!