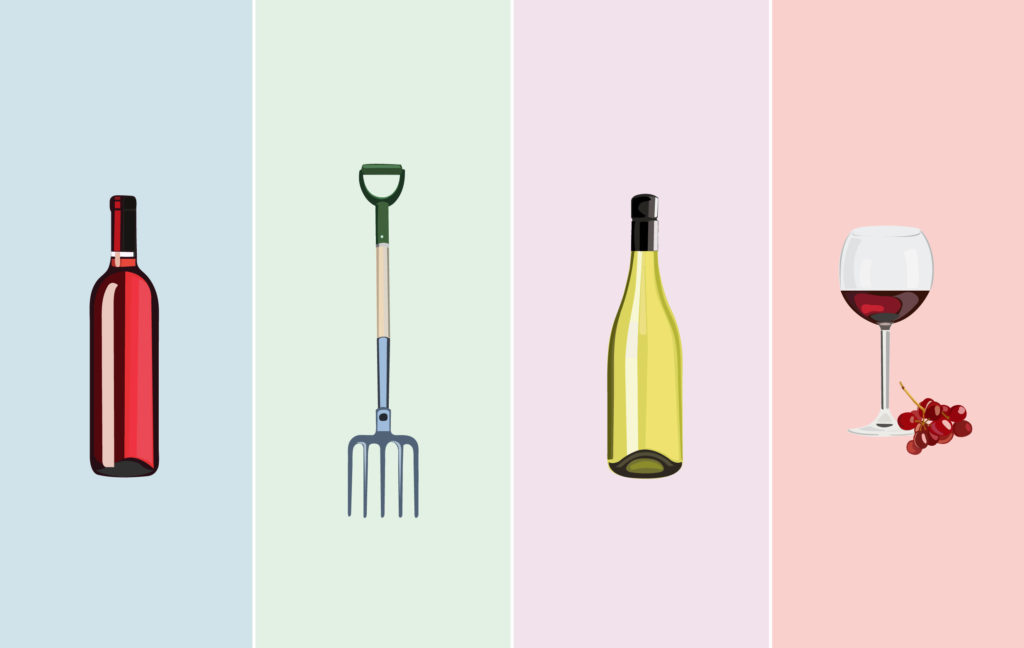 We all want to be drinking the best wine around, of course, but have you stopped to consider what is in your wine or how it’s being made? If you’re interested in knowing what goes into your products, wine shouldn’t be an exception — but how do you figure out what’s inside?

Well, we’re here to help. Read on for a clean wine cheat sheet — including definitions for some of the buzzwords you may be seeing around.

Just like tasting notes, what makes a wine “clean” is, in many ways, subjective. Even experts differ: “What I perceive to be a ‘clean wine’ may not be what another sommelier, winemaker or expert agrees on,” says New York Wine and Grape Foundation’s resident wine expert and sommelier, Paul Brady.

Still, most agree on one thing: “Clean wine is what all wine should be … made in the vineyard, not in a laboratory,” says sommelier Tim Wallace of Vermont-based The Lodge at Spruce Peak’s Solstice restaurant. “There are 60 chemical materials that the Alcohol and Tobacco Tax and Trade Bureau allow to be added to wine. To me, clean wine is a wine with roughly zero of those 60 additives in them,” Tim says. “Ingredients like Mega Purple, Velcorin Sterilizer and Copper Sulfate are among that list of 60 ingredients that I most certainly don’t want anywhere near my wine,” he adds. Why on earth are these things being added in the first place? “These additives help large commercial wineries produce wines that taste the same year after year, eliminating any vintage variation,” he explains. “They also reduce the flavors of the grapes and fields that are what make wine such a unique and delicious beverage.”

In the search for clean wine, one place to start is with wine that’s made on the same land where the grapes are grown (as opposed to a commercial producer mixing grapes from lots of vineyards). So, we just choose a vineyard-made wine and that’s it? Not exactly …

You see, vineyards aren’t all created equal. “Some areas are prone to mildew because of their climate, such as Champagne, France. In that region, many spray Copper Sulphate in the vineyards to help treat the mildew issue. Some of these producers also pursue organic or biodynamic practices. Does using Copper Sulphate affect their standing?” says Brett H. Freeman, a 15-year wine professional and founder of Grape Intentions.

Many experts say no. According to Paul, finished wines can be equally clean, even if the process they went through varied.

Brett agrees, saying, “At the end of the day, clean wine is based around a central theme of less is more — also known as minimalist intervention. Less interference by way of fertilizers and pesticides in the vineyard and less Sugar, Sulfates and pasteurization in the cellar.”

So, given that the definition of “less” can vary depending on where grapes are grown, it’s easy to see how hard it is to classify wine as clean. If you have the opportunity to visit a vineyard and meet the winemakers, that’s a great way to understand their philosophy, and what’s realistic in a given climate.

What is Organic Wine?

The main barrier to organic wine production is U.S. restrictions on added Sulfites (a common preservative) in certified-organic wine. “One challenge to producing organic wine is preserving the wine without added Sulfites, which can greatly reduce a wine’s shelf life,” says Carrie Wynkoop, founder and CEO of Oregon-only wine club, Cellar 503. So be sure to ask your local wine store before aging an organic wine.

Alright, What is Biodynamic Wine?

Ecological harmony, starting in the vineyard and going through to bottling, is most often associated with a concept called biodynamics.

Much has been said about the mystical and spiritual practices behind it, and admittedly, “it can be a little out there — burying cow horns, a fixation on manure, picking grapes naked under a full moon — it all sounds pretty crazy,” Carrie says. “But when you set aside the silly stuff, biodynamics is really a holistic approach to farming that goes beyond the organic values of eliminating chemicals and synthetic fertilizers.” Ultimately, it’s about considering the entire vineyard as an ecosystem, including the impact of the weather and time of the year, and the influence of humans on the land as a whole.

Can Wine Be Sulfite-Free?

Have you ever heard someone ask for a wine without Sulfites, and seen a look of concern on a waiter’s face? This preservative causes the most concern regarding clean wine. The truth is, 100% Sulfite-free wine simply doesn’t exist, but contrary to popular belief, it’s no cause for alarm. “The fact is that Sulfites are a naturally occurring by-product of fermentation,” Tim says; when yeast and sugar mix and produce CO2 and alcohol (aka how wine is made), Sulfites are an inevitable result of this chemical reaction. So how is it that some bottles are labeled “Sulfite-free?” Well, the government allows this designation if the level of Sulfites in the wine is less than 10 parts per million. The thing is, wine with that level of Sulfites is extremely unstable in the bottle — and very challenging to produce. “It is, however, quite possible to produce wines that are delicious and shelf stable without adding any CO2 other than what is naturally occurring,” Tim says. In other words, naturally occurring Sulfites aren’t the problem — it’s adding extra Sulfites that has gotten them a bad reputation. “The best way to guarantee that every wine is ‘clean’ would be to put ingredient labels on every bottle of wine, especially listing the amount of CO2 in parts per million since some natural wines have as low as 20 parts per million, while those corporate bulk wines have up to 210 parts per million,” Tim says. “The difference would be self-evident.”

What is Natural Wine?

According to Google Trends, searches for “natural wine” quintupled between June 2014 and June 2018. So, what is it exactly?

Despite soaring popularity, there’s no consistent definition. “Wine writer Alice Feiring defined natural wines as being made with nothing added to the grapes — except maybe a little bit of Sulfur before bottling — and nothing taken out, such as alcohol and acidity. To me, that is the best definition, but it isn’t shared with the entire winemaking community,” Carrie says.

Though usually made with organic and/or biodynamic grapes, the focus here is minimal intervention in the cellar — no barrel-aging, no filtration, just let the wine do its thing. This hands-off approach results in additive-free wines that are traditional yet unexpected. No surprise they’re having a moment.

“The pétillant-naturel style is exciting because… you’re taking the raw unfinished wine, putting a cork on it and letting nature take its course and ferment in-bottle,” says Andrew Carriger, Wine Director at Tesse Restaurant. “Carbonation is trapped, creating a sparkling wine and also leaving all those fun, funky, unfiltered elements in the bottle.” The result is differences from bottle to bottle, even within the same vintage. “Pétinallant-naturel wines allow no intervention during winemaking,” Andrew explains. “The winemaker must gamble in their own abilities and bottle an unfinished product that they have been unable to taste or course correct, hence their current cult following.”

Not every wine region in the world is able to grow grapes organically, but that doesn’t mean more traditionally farmed grapes can’t make excellent wine. So, how should you go about navigating the oh-so-intimidating wine aisles? The key is transparency.

“What’s important is to just know what the process was and determine for oneself if that process seems acceptable to be putting that wine in your body,” advises Paul.

We’ll raise a glass to that.

Some clean wines to try:

More important than your wine choices? Drinking responsibly, of course! We’re definitely not here to encourage underage drinking, or drinking while pregnant, driving or on medications that tell you not to. But if you’re a responsible adult who is interested in making good wine choices, enjoy!